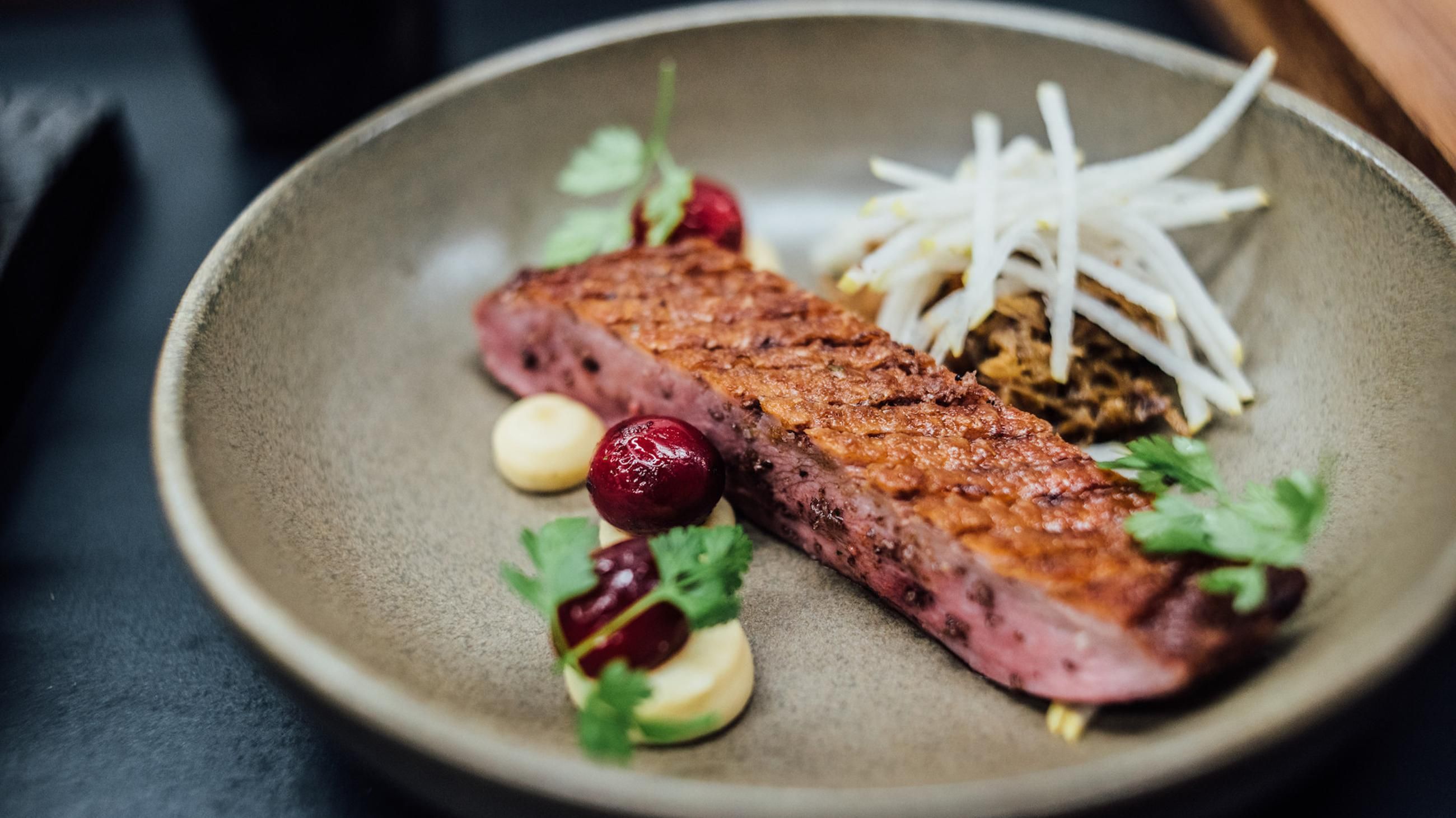 The way to a person’s heart is through the stomach – just like the way to a great vacation on Germany’s biggest island, since Rügen is the island of gourmets. An island in the waters of which, herring, codfish, flounder and sea trout are caught and in whose bodden waters grow magnificent pike, zander and perch. Already the fragrance escaping the smokers promises culinary delights. But also the thought of a Matjes- (soused herring), Bismarck-herring- or salmon-sandwich is mouth-watering. Whether in the small fishing village with its reed-thatched cottages or in the sophisticated Baltic Sea resorts – whoever orders fish on the island of Rügen, no matter if cured, fried, pickled or as a soup, cannot go wrong; it could not be fresher. Only short time spans pass between catch and pan, guaranteed. And word that Rügen’s chefs master their craft, has long spread far beyond the island’s borders. How about codfish fillet baked in nut crust with root vegetables and potato puree or herring, as much as one wants? Here we cater for all tastes, not only in the Heringswochen (“Herring Weeks”) or the Fischertage (“Fishing Days”) in springtime, the Mönchguter Heringsfest (“Mönchgut Herring Festival”) in Göhren or the Reusenfest (“Fish Trap Festival”) in Baabe. Garpike season in many restaurants starts when the rape blooms. The garfish or garpike is a roughly 80-centimeters-long, elongated and fast fish with green fishbones and elongated jaws, which look somewhat like a pointed „beak“.In springtime, the garpike migrates to the bodden in shoals to spawn and it is also there, that it gets caught with nets, fishing rods and that it ends up in the pan. Fried garpike with roast potatoes and rhubarb compote, a seasonal delicacy, a must for every curiosity-seeker. What would Rügen be without its regional products, the meat, the eggs, milk and cheese. One who has built up a good reputation for decades and is on everyone’s lips, is the “Rügener Badejunge”, an original island product. “A white Camembert from Germany’s largest green island“, the most frequently sold Camembert in all of Germany.
And also the tinned fish from Sassnitz represent quality and freshness of the island. Unsurprisingly, since the traditional Rügen Fish Company is, according to its own statement, the most modern fish processing facility in Europe. In Rügen’s west grow ducks and geese, adventure farms invite you for a visit and surprise you with consistently new ideas. Fine brandies from old fruit species get produced in West Rügen, whereas, on the eastern Mönchgut peninsula, Pomeranian coarsewool sheep are at home and „Pommerscher Greif“ ages, an original Whiskey from Rügen. In the North, at Cape Arkona, on a plantation not far from the cliff coast and the Baltic Sea, grows and thrives Rügen’s seabuckthorn, which gets processed into juice and liquors. And whoever wants, as guest, can pick the „lemon of the North“ in autumn and have the juice extracted to take away. In the South, based in Poseritz, is a small dairy factory. Natural products, such as curd, cream cheese, yoghurt, seabuckthorn-jam and elder-jelly are produced there, and it truly deserves its name „Rügener Inselfrische“ („Rügen’s island freshness“).And not to forget – game on Rügen. Or the meat and sausage specialties of the Rügener Landschlachterei (a butcher’s shop) in Gademow nearby Bergen or the Öhe-cattle and -sheep, with its extraordinary meat quality, because they feed on juicy herbs and aromatic grasses of the salt marshes on a small island near Schaprode, and are deliciously prepared in Schilling’s Guesthouse.

Look for the „Regionale Esskultur“ („Regional Food Culture“) logo, when choosing restaurants. Then it is not just labelled Rügen, it also contains Rügen! Rügen is pleasure, an island to experience, enjoy, savour and take along.