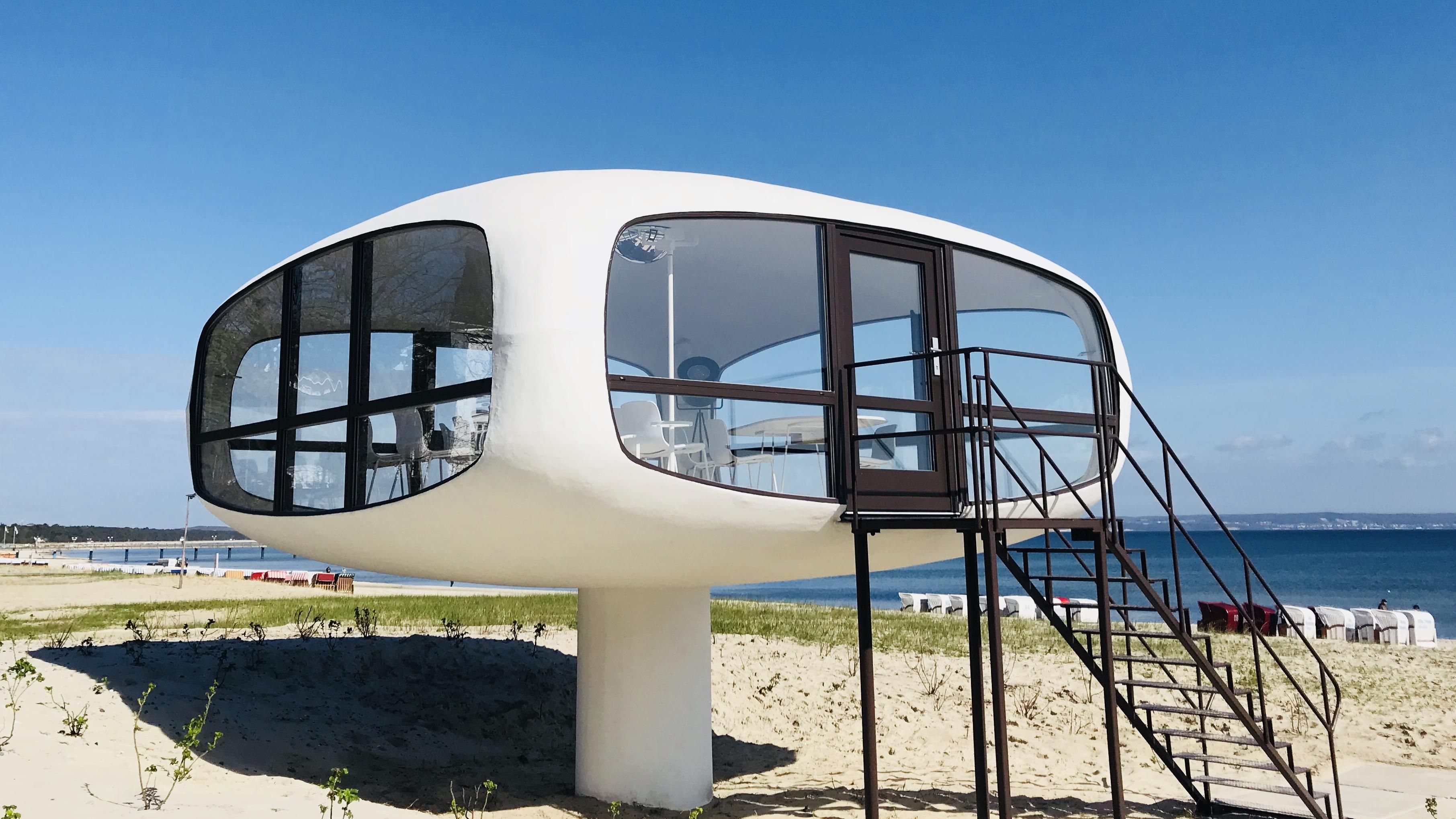 The former rescue tower in Binz is one of 50 shell structures worldwide, which were created by master-builder Ulrich Müther (1934-2007) and his men of the island of Rügen. The oval tower with its panorama windows looks like a UFO, landed in the middle of the dunes of Rügen’s largest Baltic Sea resort – amidst beach grass, wild roses, parasol mushrooms and pines. The rescue tower is a popular outpost of the Binz register office and was the smallest and most original „concert hall“ of the Mecklenburg-Western Pomerania Festival. Artist Carolina Eyck played the Theremin there, an electronic instrument that produces spherical sounds without physical contact. She payed tribute to Müther’s works with an improvisational piece. His rescue tower is a small landmark – just like the former bus stop shelter by the Binz roundabout.
Ulrich Müther was a visionary who developed and implemented hyperbolic paraboloids, the so-called hypar shells, which turned into monuments of stone. 12 of them can be discovered on the island of Rügen – not always recognizable at first sight: the bus stop shelter in Buschvitz, the swimming-pool-roofing in the Cliff Hotel Sellin, the Ostseeperle in Glowe, the Inselparadies at Baabe’s beachside or the music pavilion at the Sassnitz promenade. The gymnasium in Gingst has a Müther-roof – just like the swimming-pool in the Rügen-Hotel Sassnitz. Rügen’s master-builder created his shells even in the IFA Ferienpark, traces of modern architecture, made in German Democratic Republic. His double-curved shotcrete ceilings, resembling swelled and frozen sails or folded paper, made building history. But every beginning is difficult. Specialised literature for the static calculation of these constructions did not exist in the 1950s and 60s, only the specialist book of an American. Müther’s wife translated the book and her husband delved into the matter. Even today, Ulrich Müther’s concrete shells grace the foot of the television tower on the Alexanderplatz  in Berlin and give planetariums, sports arenas, bobsleigh runs and functional buildings a special touch.