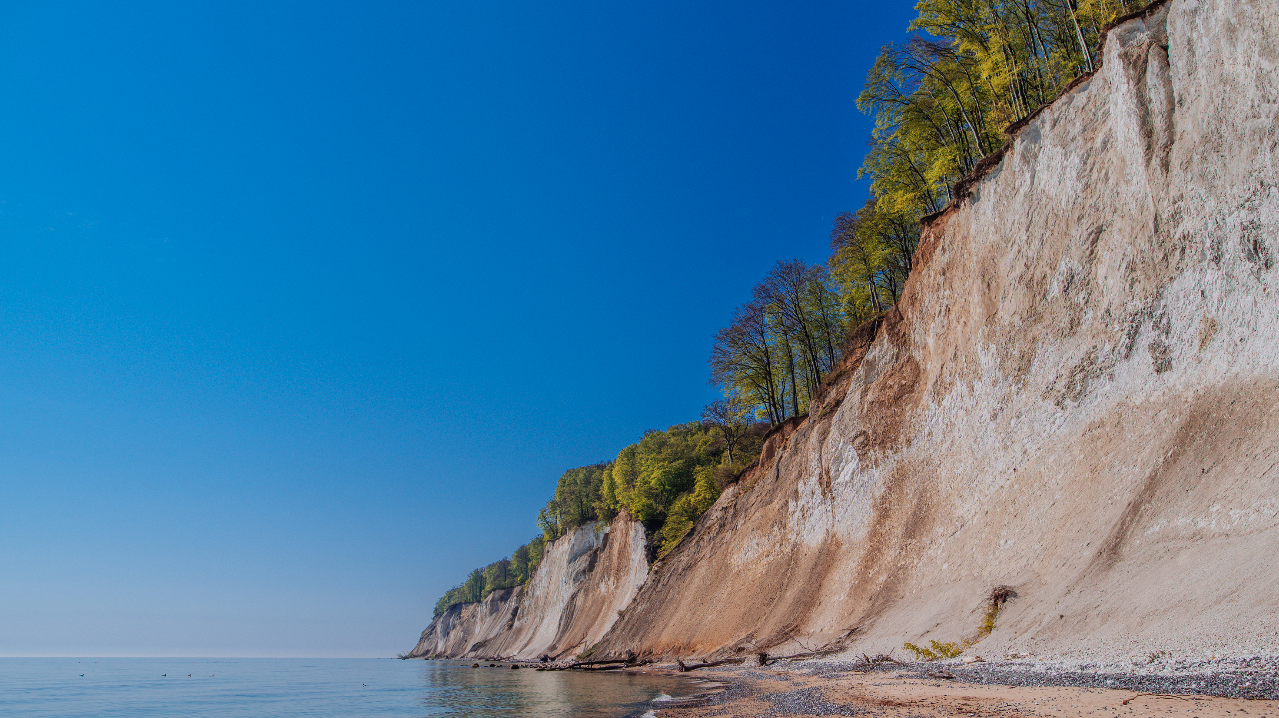 Situated in the northeast of the island of Rügen, is the Jasmund peninsula, a nature paradise, with its world-renowned chalk cliffs, deep forests and peaceful lakes. The peninsula is surrounded by the Baltic Sea and attached to the rest of the island only by a narrow coastal strip. In the natural reserve of the Jasmund peninsula, visitors encounter a spectacular landscape amid a relaxing environment. Numerous hiking trails and cycle paths animate to explore the peninsula with its botanical treasures.

The chalk cliffs on the Jasmund peninsula are part of the Jasmund National Park. This includes the 118-metre-high Königsstuhl (“King’s Chair”), together with the Kleine Stubbenkammer with its chalk cliffs, south from the Königsstuhl, as well as expansive forests and little lakes. The chalk landscape has been under protection since 1929 and has been part of the national park since 1990. The beech forests of the Stubnitz are one of their kind and have been designated a UNESCO natural World Heritage Site in 2011. Marshlands and coastal forests along the cliff coast are home to rare plant and tree species, best explored on a hike. Deeply hidden in the forests lies lake Hertha, an ancient Germanic cult site, according to legend. In the Nationalpark-Zenrum Königsstuhl (the visitor’s centre of Jasmund National Park), visitors can discover interesting details about the formation of the chalk cliffs during the Ice Age and about the history of the peninsula. From here, one has a splendid view on the waves of the Baltic Sea and the cliff coast.

The port town of Sassnitz is the gateway to the peninsula. Holidaymakers can choose between accommodation in either a hotel or a holiday apartment. Also, numerous holiday cottages are available, many of which are suitable for families. The Sassnitz port is starting point for many cruises, which take you on a tour along the chalk coast, with a fantastic view on the steep chalk cliffs. The Baltic Sea ferries to Scandinavia or in direction of the Baltic depart from the ferry port Sassnitz-Mukran.